Mike joined FreeWheel from Univision, where he most recently served as General Manager, Local Digital, overseeing the Company’s local TV and radio digital business. Prior to that role, he served as Vice President, Digital Revenue Operations. In this capacity, he developed and managed the revenue operations function for Univision’s digital business, which included ad ops, yield management, reporting, programmatic sales, and initiatives including viewability, brand safety and data. Mike was also a key member of Univision’s 2014 World Cup digital leadership team.

At Booz & Company, Mike led strategy and operations consulting engagements for media clients operating in the linear and digital space in the US and Middle East/ North Africa.

Mike earned his BA in Economics at Boston College and holds an MBA from the Tuck School of Business at Dartmouth College. In his free time he serves on the Junior Board for Rosie’s Theater Kids, plays the guitar and travels. 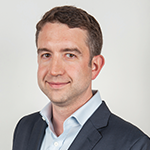