Prior to his time at NBCU, Naylor served as the SVP of Sales for the iVillage Properties, which was acquired by NBCU in May 2006. Before joining iVillage, he served as VP of Sales for Terra Lycos. He started his internet sales career at Wired Digital.

In the advertising community, Naylor is a member of the NATPE NXTGN Advisory Board. He also served as the Chairman of the Board of the Internet Advertising Bureau (IAB) in 2012 and sat on the board for over ten years. In 2014, Naylor was named the founding chairman for the IAB's Video Center of Excellence. Naylor also served as Treasurer for the Online Publishers' Association from 2010 to 2013 and sat on the board for over ten years. He is the recipient of the 2015 ASPY Industry Luminary Award and the 2014 ad: tech Industry Achievement award. And in 2016, Naylor was recognized by Adweek as one of the 50 Most Indispensable Executives in Marketing. 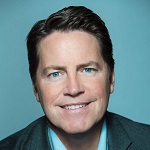